In his 22 year career in recruiting, Henry has successfully filled over 900 searches in the area of sales, accounting/finance, IT, Human Resources, Client Services, Managers, Vice Presidents, and members of the C-suite and Board of Directors for small and large private and public companies. In 2006 Henry was awarded “Most Valuable Player” by the president of BAO, Inc. In 1998, Henry earned the CPC (Certified Placement Consultant) designation from The National Association of Personnel Services. This designation is highly respected within the recruitment industry. In 2009 Henry earned the Certified Employee Retention Specialist (CERS) designation from the National Association of Personnel Services. The CERS credential along with the pre-requisite CPC or the Certified Temporary-Staffing Specialist (CTS) are the only national designations recognized globally by the personnel services and staffing industry. At the time of the designation, Henry was one of only 40 staffing professionals to have the designation. Currently, Henry is the trainer for the immersion CERS class. Currently, Henry is the immersion class instructor for the CERS training and examination.

In 2012, Henry was named the H. Michael Boyd Excellence in Employment for the Association of Employment Professionals.

In December of 2014, Henry’s book on recruiting, "The Power of Proactive Recruiting" (Order the Book Here) was released in written, ebook and audiobook formats. Henry has been a guest on Northeast Delta Dental Radio WTPL 107.7.

Henry has been associated with Sales Recruiters, Inc (www.salesrecruiters.com) since 1995 serving as Recruiter, Manager, and President. Henry serves on the Northern New England Association of Personnel Services Board of Directors and is active in his local community through the Chamber of Commerce, NEAPS, NAPS, and Big Brothers/Big Sisters. An acknowledged leader in the industry, Henry has been published several times in Sales and Marketing Executive Report, Selling Magazine’s Special Report, Selling Power, Fortune Small Business, Metrowest Daily News and Selling Crossing Magazine. He has also been quoted in The Wall Street Journal’s FINS publication.

ORDER THE BOOK
THE POWER OF PROACTIVE RECRUITING

"This book is a map though that jungle of a world out there we call hiring, with some recipes for some great snacks along the way. Not only will you be able to find your way through the maze, but you will be satisfied when you’re at your journey’s end.

Henry takes you thru that process, step by step, and shows you the way with solid examples and illustrations, making each chapter very clear in terms of what must be done, the order in which it should be done and even consequences when we don’t follow the road map (or the recipe for that snack along the way)." – From the Foreword by John Sacerdote, President, National Association of Personnel Services

Listen to the replay of author, Henry Glickel, discuss the book on the Northeast Delta Dental Podcast

LISTEN TO THE POD CAST 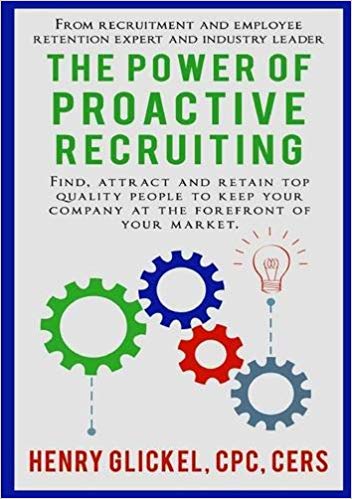 Tell Us What You Need

Tell Us What You Need

Take a look at what our clients have to say...